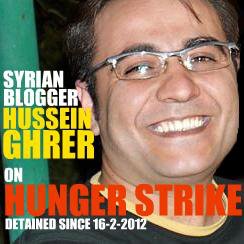 We received information that Syrian blogger Hussein Greer began a hunger strike to protest his continued incarceration after spending 143 days in detention cells as of the date of this statement.

Ghrer was detained on 16-2-2012 in a raid on Syrian Center for Media and Freedom of Expression’s office in Damascus by Air Force Intelligence – Mazzah branch. This is Ghrer's second arrest; he was detained on 24-10-2011 and released on 1-12-2011 on bail and is still on trial.

Air Force Intelligence had confiscated computers and arrested the entire staff of the Syrian Center along with their visitors. Eight employees were released and they are now under martial court on charges of "disseminating banned publications." The other five staff members are still in detention: director of the Syrian Center for Media and freedom of Expression, Mazen Darwish, Hussein Ghrer, Abdel Rahman Hamada, Hani Zetani and Mansour Al-Omari.

We learned that Abdel Rahman Hmada, Hani Zitani and Mansour Al- Omari were transferred from Air Force Intelligence – Mazzah branch, to a detention center belonging to the 4th Brigade of the Syrian Army.  Our sources also mentioned that Mazen Darwish was transferred from his cell in AFI – Mazzeh Branch, but it is unknown if his transfer was to another branch or inside the same one.

Syrian blogger Hussein Ghrer, on the other hand, was transferred alone from AFI – Mazzah to AFI in in Tahrir Square in Damascus, where he began a hunger strike to protest his continued detention.

Ghrer is a prominent Syrian blogger known for his noticeable participation in Syrian blogsphere debates on public affairs. He took part in in solidarity campaigns with occupied Palestine and the occupied Golan as well.

33 year-old Ghrer is a Computer Science graduate. He is married with two children, Ward and Zain.

To our great concern, Ghrer suffers from hypertensive vascular disease and mitral valve prolapse. We fear a deterioration in his health condition in Syrian detention cells, known for their poor environmental, psychological and physical conditions. The detention centers’ environment and their lack of the necessary medical equipment may pose a direct threat to his life.
We, Syrian bloggers, demand the immediate and unconditional release of our colleague in detention, blogger and friend Hussein Ghrer especially since more than four months had passed without pressing charges against. His four-month long detention far exceeds the maximum legal limits for incarceration without court referral which is set to 60-days according to Syrian law.

We also call for the release of Ghrer’s colleagues at the Syrian Center for Media and Freedom of Expression and all detainees and prisoners being held at security branches and civil and military prisons, especially those whose detention has exceeded sixty days. We condemn all forms of torture exercised by the Shabiha and security agents against the detainees and prisoners in Syrian cells.

Damascus: Syrian Blogger Hussein Ghrer was kidnapped from the streets by Syrian security service on Monday 24-10-2011 and no information about him has come to light since that time.

We, Syrian bloggers in Syria and in diaspora strongly condemn the detention our friend and fellow blogger Hussein Ghrer and call for his immediate release along with thousands of Syrian detainees detained in Syria for calling for freedom.

Hussein Ghrer blogs at http://www.ghrer.net/ and is considered one of the prominent bloggers in the Syrian blogsphere. He is married and a father of two children, Ward is three years old, and Zain is six months old.

Join our call to free our friend Hussein Ghrer. send your blog posts to free.hussein2011@gmail.com.